Taking Screenshots for uploading to your Favorite Forum

We all know how to take screen shot's and how to upload them, the thing that's missing is way to better you're shots for upload to be approved at some sites like flightsim.com forums and other flightsim communities.  So this tutorial prepares you for doing just that. When i first started posting shots at this forum i was taken aback as how un edited and and dull they were even though the image was totally in some sort of action...all because of the active text that was shown on it. A function within snapper allows you to show the location for where the image was taken. Its actually a clever location for it and can help remember where that screen shot was taken but the text size is too big, something that Micheal Overtoom (creator of Snapper) is ready to change. 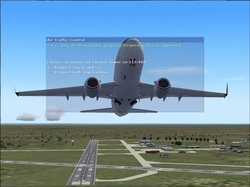 When it comes to uploading you will see that the aircraft in the image is totally covered by ATC text and  would be rejected from people that dont like it like that right off the bat because of all of the issues with text. If you can try to not take shots like this and keep all exterior text it will improve your approval chances by 60%. If you can crop or delete out this whole part from the text it would make the image have a rating of 100% and be ready for people to accept it and may be a top 5 at some point, although that comes down to an issue of who visits it and how great the image is. This one may be at the top of how much it "moves" you're mind to think its moving when its not . Waiting an extra few seconds would totally help for this or you could change the settings and not have it at all 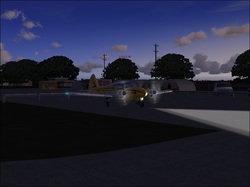 Poor lighting has to do with:
* Lighting in image is bad;
*no sunlight showing

To fix this you should:
* Shoot the side of the aircraft or scenery facing the sun.

Again the only thing worse than getting an late night screen shot not liked is because its too dark. try not to take shots later than sundown because bringing up the brightness from a dark picture can be hard for a lot of image editors, at least with paint.net's auto level really diminishes the aspect of the image and wont be approved at all. But sometimes you can get great shots at night as long as you are near a light or some sort of sunlight shining through before it goes or being under an airport gate light but other than that in the air there isn't much you can see until sunrise the next day. Doing long haul flights from YSSY to EGLL flights might have a period where you are flying at night...The only real place you can take the shots is during takeoff and taxiing  until the sun rises or you are flying through sunny areas.If you can get some last night flights try getting an angle close to the moon because it sometimes radiates and shots come out smoother and nicer. 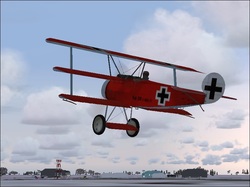 If you are looking for getting your shots to sites like flightsim.com then you may want to have an image that is not too off the center of the frame. You want a crisp image and great background as well so keep in your mind what you want to show and only upload those in which you enjoy looking at.